Access to Community
Water Access
water tank
Water Access - details
The community fills their water tanks from a house next to the Caramelo checkpoint. The house that is connected to water due to an old permit. The owner of the house is from the same family as one of the families in the community (Zweidin). They buy 3 cubes of water for 25 NIS.
Electric Connection - details
Comet-ME is working with the community on the establishment of solar panel, which are expected to operate by January of 2020.
Health Care
Health Care - details
The UNRWA clinic used to visit the community but these visits stopped in 2018.
The closest health clinic is in Taybeh village or Deir Jreir. The nearest hospitals are in Ramallah and Jericho.
Location of Services
Villages of Deir Dubwan, Deir Jrir and Taybeh

History
The Kaa'bneh were expelled from their lands in 1948. Between 1948 to 1995 they were displaced by the Israeli authorities severel times from the areas in which they settled, originally in South Hebron Hills and then around Jericho. In 1995 they reached an agreement with the IDF to move to Wadi al Seeq, where they reside today. They are unable to move anywhere else since.
The Jahalin families joined the community in 2003 due to a conflicts with other families. The families from Yatta joined the community a bit later.

Seasonal Movement
no
Seasonal Movement - details
The community has stayed permanently in this area since 1995.
Community Initiatives
public building
Initiative in the community - details
primary school
Other Occupation
Main Occupation
Woman's Occupation
General Livelihood - details
98% of the families depend on shepherding. Some work in agriculture for a temporary period and only one person from Kaa'bneh is employed as a teacher in Imleihat - Mua'rajat East school. 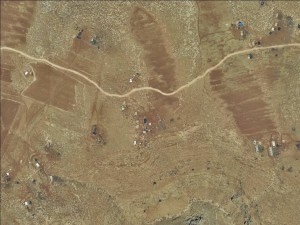