Land Ownership
Land Ownership - details
There are agreements between the owners from Kufur Malek and Mughayir and the community about the lease of the lands.
Planning
No plan
Planning - details
A few application for building permits were submitted
Structure Type
Building materials - details
They have some barracks for animal hair

Access to Community
Water Access
Water Access - details
The community fills their water tanks in the Ein Samia filling point. Three and a half cubes of water costs 60 NIS, yet this prices goes up in the winter when the access to the community becomes more difficult.
Electric Connection
solar panel
Health Care
clinic in distant town/village
Health Care - details
The nearest clinics are in Silwad and Turmusa'ya. The nearest hospital is in Ramallah.
Location of Services
Kufur Malek and Mughayir

History
The community was displaced in 1968 from the area of Um Daraj as the entire agricultural area was declared a military training area. Some members of the community went to Yatta area. The rest of the community were forced to move several times since the 70's, as military bases and settlements grew in the area, particularly the settlement of Kokhav Hashahar. They settled in their current location in 2000 permanently.
The families from As Samoua' came in 1998 to west Ramallah and then moved to the eastern side to Ras A tin. 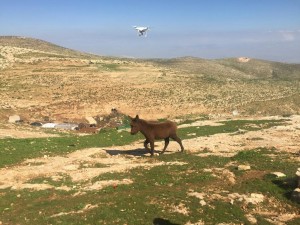