Land Ownership
Land Ownership - details
Some of the lands belong to residents of Anata.
Planning
community initiative plan
Planning - details
As part of the legal protection Bimkom prepared a general plan for the communities around Abu George Road including Nkheila
Structure Type

Access to Community
private vehicle
Access to Community - details
Though they are located next to the main road, public transportation is forbidden from stopping in the area.
The community can be reached through the road leading to Almon settlement.
Water Access
water tank
Water Access - details
The community buys water tanks from Anata, each tank of 3.5 cubic meters of water costs 100 NIS. Access to nearby springs is denied.
Electric Connection
solar panel
Electric Connection - details
Commet-ME installed solar panels in 2017
Health Care
Health Care - details
A mobile clinic of UNRWA visits twice a month. For other services the community goes to the clinics in Anata and Al-Eizariya. The nearest hospitals are in Ramallah and Jericho.
Location of Services
Anata and Ramallah

History
The community is originally from South Hebron Hills where they own private lands. They arrived to Nkheileh in 1948 and have been moving seasonally between the two areas searching for grazing lands and water. They left South Hebron Hills as it became over-populated by fleeing communities that arrived to the area after 1948. During the early 90's the community stopped the seasonal movement and settled permanently in Nkheileh. At the time they chose this area for its grazing lands and water resources.

Seasonal Movement
partly
Seasonal Movement - details
At times they move Nabi Musa between January and February for about 50 days, yet this does not happen every year.
Community Initiatives
no Initiatives
Other Occupation
Main Occupation
Woman's Occupation
General Livelihood - details
Grazing areas are severely limited by surrounding settlements and the community feeds the herds without grazing. They use some of the lands to raise barley for the herds. They own about 700 sheep and goats and sell their dairy products to clients in A-Ram and Hizme. Their herds were reduced dramatically due to the limitations on grazing.
Some members of the community used to work in settlements, but recently it is hardly possible to get working permits.

Threats and Obstacles
fjfxjsfjsyjsyj
Threats and Obstacles - details
The community is located within the jurisdictional realm of Almon, and partly within the limits of the new plan for the connection to road no' 1.
The sewage from nearby settlements runs in the valley, causing serious environmental hazards.
Grazing areas are restricted by surrounding settlements like Kfar Adumim and Almon as well as by the nature reserve. The community reports that at times settlers throw stones and shoot towards the herds and according to the community there were instances when sheep were killed.
As the community is not allowed to build or expand, young couple leave to Anata in search of housing. 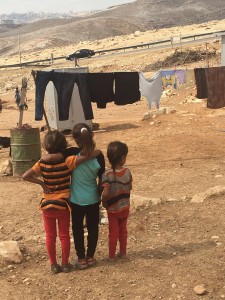