History
In 1948 they were expelled to South Hebron Hills and a few years later they moved to Deir Dubwan lands in an area called Al Jutheh, near Ramallah. In 1983 the IDF declared Al Jutheh as a military zone so they moved to their current location in Mua'arajat east. 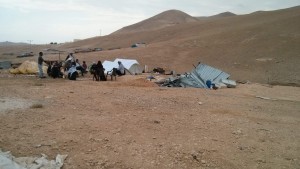 North of Jericho, south of Road 449