Number of Families
25
Tribe
testing the tooltip
Jahalin
Sub-Tribe
Saraya'a
Names of Families
A'raa'ra (9 families) , Kurshan(6 families), Bua'ran (10 families)
Refugees
Refugees Details
Some are registered as refugees and some are not

Land Ownership
Land Ownership - details
The community leases the lands from its owners in Anata. Part of the community is inside the expropriation order, another part on privately owned lands. Few lands are registered state lands. The northern part of the community is located on lands slated for the construction of a road planned to connect Anatot Junction with Road No. 1, while the southern part is boxed in between the plan for the extant Road No. 1 and the plan for the new road.
Planning
community initiative plan
Planning - details
A guideline principles plan, for all communities in the Al Khan Al Ahmar area, was submitted to ICA, but was rejected.
Structure Type

Access to Community
Access to Community - details
A dirt road, north to road no' 1 close to the junction of Abu George Road, leads to the community.
Water Access
authorized connection
Water Access - details
Authorized connection with a meter to Israeli Mekorot Company
Electric Connection - details
The community used to have generators from Al-Islah but these were not maintained and did not function well. Nowadays Comet-ME is running a new project connecting solar panels to all houses in the community.
Health Care
clinic in distant town/village
Health Care - details
Clinics are in Anata and Al-Eizariya. A mobile clinic visits the neighboring community of Abu helw, once a month. The nearest hospital is in Jericho.
Location of Services
Anata, Al-Eizariya, Jericho

History
Originally from Tel Arad, the community arrived to Al Mihtwish after being expelled in the 1950s. They first moved to Almasfara in east Hebron, where they owned lands , but had to leave due to lack of space for the entire community. They settled in Al Mihtwish, on private lands owned by residents of Anata.
Parts of the southern lands were expropriated in 1975, and included in the Ma’ale Adumim Outline plan. Historical analysis reveals continuous settlement here since the 70's, which became more intensive beginning in the 90's.

Seasonal Movement
partly
Seasonal Movement - details
Some of the community continued moving for seasonal grazing lands (Izbeh) in Jaba' for a while between 1977-2003. Today very few families still go.
Community Initiatives
agriculture
Initiative in the community - details
The community used to have an agricultural project supported by Viento de Terra, which supplied vegetables for the entire community, but it no longer continues due to lack of water.
Other Occupation
Main Occupation
Woman's Occupation
General Livelihood - details
They own about 200 sheep and goats.
A few men work in settlements. Work permits are depending on the political situation. In recent years much fewer permits are given by Israel.

Threats and Obstacles
fjfxjsfjsyjsyj
Threats and Obstacles - details
The area is included within the expansion plans for Ma’ale Adumim, and parts of the land has been used for new settelments.
The area is also included partially within plans for two roads.
Grazing areas and water access are severely restricted. Access to marketing areas in Jerusalem, Wadi Qilt, Ein Farah, and Ein Fawwar has been blocked, since it was declared a natural reserve, making it impossible for the community to sell their products there. 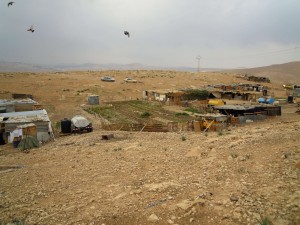 Jerusalem periphery, along Road 1 leading from Jerusalem to Jericho