Land Ownership
state owned land
Land Ownership - details
Their lands were owned by people from Isawiya, but were confiscated back at 1975 for the establishment of Ma'ale Adumim
Planning
community initiative plan
Planning - details
The community is part of a sub-regional plan for 7 communities in the area. The plan was submitted as part of the legal procedure.
Structure Type

Access to Community
4X4 vehicle
Access to Community - details
A dirt road through road no' 1 leads to the community, but its illegal, and public transportation is not allowed to stop there, which makes it harder for them to manage their everyday life as going in and out is very diffictult.
Water Access
authorized connection
Water Access - details
The community is connected to Ma'ale Adumim's water through Mekorot, and are in high water debts so Mekorot sometimes cuts the water connection. Their debt stood at about 25-30 thousand NIS, and in 2016 the PA covered debt for 22 thousand NIS, the communities need to pay the rest.
Electric Connection
solar panel
Electric Connection - details
Solar panels were established by Comet-ME in 2017
Health Care
Health Care - details
The nearest clinic is in Al-Eizariya. The nearest hospital is Al-Makassed in Jerusalem. They have to pay for transportation to the hospital.
They receive health insurance from the PA at least until the summer of 2020.
Location of Services
Ramallah, Jericho and Al-Eizariya

History
After being expelled from the Negev in 1948, the community moved to Masafer Yatta in South Hebron Hills. In the beginning of 50's they moved to this area on the other side of the road, where Ma'ale Adumim was built later on, causing another forcible transfer of the community. In 1999 some were forcibly transferred to A-Jabal, and some moved to the hills where they reside today, hoping to maintain their herds.

Seasonal Movement
partly
Seasonal Movement - details
One family moves to an area close to Nabi Musa where they live in caves
Community Initiatives
no Initiatives
Other Occupation
Main Occupation
herd without shepherding
Woman's Occupation
General Livelihood - details
Grazing areas have been severely restricted by the separation barrier, settlements, and the road, and they mostly feed the herds (about 1200 heads) with fodder without grazing.
Fodder is allowed to be delivered by trucks only, which costs a lot.
They can herd in the nearby hills on the other side of the road, but this requires them to pass through the drainage tunnel beneath the road to cross it.
At times herds have been confiscated.

Threats and Obstacles
fjfxjsfjsyjsyj
Threats and Obstacles - details
Tractors are not allowed to drive in the road leading to the community, making it very difficult to bring food for the herds. Cars are also not allowed to stop in the road, making it impossible of public transport to reach the area. High fines are distributed daily to drivers and pedestrians.
Number of Demolition Orders
19
Number of Demolitions
6
Demolitions - date of update
September 17, 2010
Demolitions - details
According to the community, on January 1st 2017 two buildings were demolished, despite an injunction order from the court. They were rebuilt by the community.
Swap Start/End 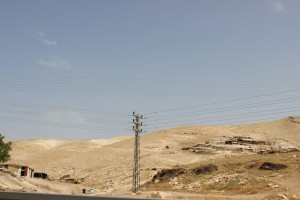 Jerusalem periphery, north to Road 1, opposite to Ma'ale Adumim