History
Originally from Bir Esbea' (Be'er Sheva), they were expelled and became refugees in 1948. Most of them arrived to Za'atra near Bethlehem after 1948. In 1967 a statistic survey indicated some of them as residents of Za'atra. Those that were not calculated into the statistics left during the 80's. Another reason for leaving was the declaring of the area as a closed military zone. The location of Ein Ayoub was chosen due to its proximity to a water source and its grazing land.

Seasonal Movement
no
Community Initiatives
no Initiatives
Other Occupation
Main Occupation
Woman's Occupation
General Livelihood - details
Their grazing area was located west of the road leading to Ras Karkar. Today the access to it is denied.

Threats and Obstacles
fjfxjsfjsyjsyj
road
Threats and Obstacles - details
Residents of Dir Amar village deny access to land. The community cannot reach any of its grazing areas.
Number of Demolition Orders
10
Number of Demolitions
10
Demolitions - date of update
September 17, 2010
Demolitions - details
According to the community, in the end of November 2011, cease-work orders were issued. In December 2013 the entire compound was demolished. The residents of Ain Ayoub managed to rebuild the tents and tin shacks. NGOs that arrived to the area ( brought more shacks yet their access to the area was denied by the inhabitants of Ras Karkar who were anxious about the Bedouin community settling on their lands. In 2015 new demolition orders were issued for new structures.
Swap Start/End 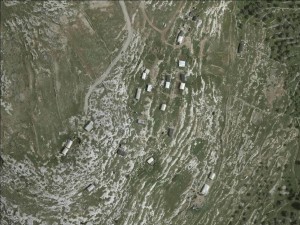