Land Ownership
private
Land Ownership - details
The community owns part of the land, but rents other parts.
Planning
Planning - details
The IPCC has initiated a plan through the PA in response to the Israeli plan for the national park
Structure Type

Access to Community
private vehicle
Water Access
connection to neighboring village
Water Access - details
The residents pay 450 NIS on water every month.
Electric Connection
connection to neighboring village
Electric Connection - details
The community connects to homes in Nabi Samuel, and pay directly to their inhabitants, but electricity prices are high and most of them cannot afford them and so are disconnect. The community has begun to use solar panels instead.
Health Care
Health Care - details
The nearest clinic is in Bir Nabala. The nearest hospital is the governmental hospital in Ramallah. They are also eligible to receive UNRWA treatment due to their refugee status, but the community reports that many of these services were cut. A van comes to Nabi Samuel with supplies every Saturday. The residents go to a government hospital - which is free for refugees - in Ramallah as needed.
Location of Services
Al Jib, Nabi Samuel, and Ramallah.

History
The community was expelled in 1948. They settled east of Bethlehem, near Zaa'tara for two years and then moved to Khan al Ahmar area in search of greener lands. They used to stay in the winter in Khan al Ahmar and in the summer in Nabi Samuel. After the separation barrier was constructed they moved to where they are sitting now. Twenty families were separated from the community by the separation barrier. Since the 90s, settlers have been started disturbing the residents and taking pictures of the area. Since this time, the residents have been able to build.

Threats and Obstacles
fjfxjsfjsyjsyj
Threats and Obstacles - details
The entire area is designated to become a national park. Because the road leading to the village is not under the local plan, it is under constant risk of closure.
Number of Demolition Orders
55
Number of Demolitions
5
Demolitions - details
The village has been in court over demolition orders since 2005
Swap Start/End 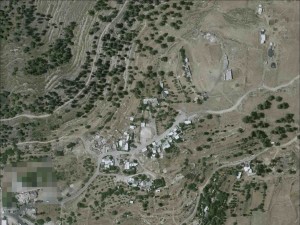 North of Jerusalem, along Road 436, 1 km from Jerusalem boundary